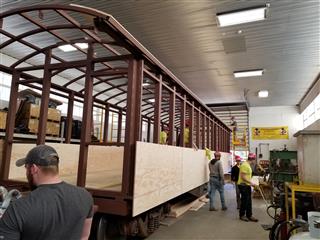 The fourth and final coach for the Northern Central Railway will be hitting the rails in the fall of 2020. The creation of this coach for the train set has been three years in the making, and highlights the many changes and challenges in modern tourist railroading. To fully understand these challenges, we need to step back and look at the evolution of the passenger equipment used on the Northern Central Railway (NCR) since we launched in 2013 as Steam Into History.

The Beginning of Steam Into History

For the first season, three cars were leased from the Reader Railroad of Arkansas. The reason for this lies in the type of equipment that NCR is using. The coaches are period-appropriate for 1860, which is the time period portrayed with the steam engine York Number 17.

Our founder, William Simpson, wanted to bring back railroading as it existed in the mid-to-late 19th century. He had seen all of these examples of early steam engines in museums and photographs, but no one was running equipment from this time period, and Bill wanted to change that.

All of the equipment, aside from our diesel electric GP9 engine, have been built from scratch. The reason is simple: you can’t run a museum piece on daily passenger service on a tourist railway. Even old rail passenger cars presented challenges since they were made of wood from their frames up.

It is easy to forget that things were not always as they are today. Many of us have the images in our minds of the sleek streamliner of the 1930s, with their ornate polished steel and aluminum coaches. Or we think of the all-steel bodies from passenger commuter trains of the 1950s and 60s. All-steel coaches did not come into full use until the late 1920s, and prior to the 1890s, there were few steel-framed or clad cars.

As Steam Into History was launching, the modern market for passenger cars offered plenty of mid-twentieth century offerings, but these cars did not align with the feel of the railroad. Furthermore, there was a more practical issue with modern heavy-weight equipment, which was too heavy to operate with our steam locomotive. The current passenger equipment operated by NCR weighs about half of what a modern passenger car weighs, giving our steam engine the ability to pull more cars.

What We Cannot Buy, We Can Build

Therefore, our mantra became, “What we cannot buy, we can build.”

In the fall of 2012, we commissioned Reader Railroad to build the first two cars, a passenger car and a combine car, for the railroad. They were built of wood to give the look and feel we needed.

The first two cars, and in fact all cars, have started on the frames of old flat cars. This allows the creation of cars that look authentic, but provide modern frames and safety features. You may also notice that all of our cars are a barrel-type roof design, without the monitor styling of more modern cars. Again, this was intentional to create cars that emulate the 1860s look.

With the arrival of the first two cars that the Northern Central Railway owned, the leased passenger equipment returned home and passenger operations continued into 2014. It soon became obvious that more than two passenger cars were needed to run the railroad, because we were limited to a maximum seating capacity of 75 persons. 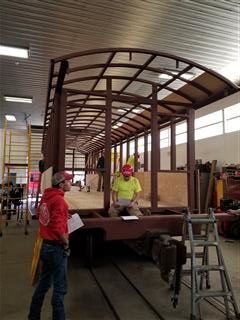 So in 2015, the first truly locally-designed and built passenger car was created for our railroad. Rail Mechanical Services (RMS) of Columbia, PA worked with NCR to design a better car that took all of the things we had learned from creating the first two cars to create an improved passenger experience. That year the third car, a four-season car, was added to the car roster.

What makes the four-season car so much better?

For starters, the windows can be kept in place for the cold winter months and removed in the summer to provide the true feel of 15 MPH air conditioning. However, many of the innovations in the four-seasons car were to parts of the car the public never sees, mainly the undercarriage and framing.

Modern roller-bearing trucks were used under this car to provide a smoother ride to the customer while allowing the engine to pull the car with much less effort when compared to the old friction-bearing design.

Another redesigned feature was the frame of the car for the wall and roof. For this car we did not use wood, but rather steel tube framing. This provides a much more stable car while allowing for things like wireways and ridged connection points for wall sheeting and finishing.

This same design was used on the new passenger coach and has proved to be a workhorse design for any future equipment for NCR.

In trying to recreate mid-19th century coaches, much research was conducted by our team.

These surviving example cars, along with historical books and photographs, allowed the production of the current Northern Central Railway train set. In the end, all of the surviving example cars proved that each car had features which made it a railway passenger car, while highlighting the fact that each manufacturer used materials and construction techniques readily available during that time period. This gave us great confidence that modern reproductions of cars from the mid-19th century era could not only be produced, but could be produced just as effectively and faithfully as the originals.

Today’s NCR guests can now step onto these passenger cars and get a realistic feel for how rail travel actually occurred during the 19th century, right down to every bump, noise, and sway of the car on the tracks!

Our new coach will have seating for up to 60 persons, and will feature a reproduction of authentic 19th century coach seating with the popular reversible seat back positioning. There will be a coal stove for winter heating and operable windows to provide passengers options for view and 19th century climate control.

Most importantly, the coach will fit with the character of the other three pieces of equipment and give us the ability to offer more passengers a 19th century rail experience during busy events as well as the ever-popular autumn and holiday seasons.

Recreating these cars has been a labor of love for the history of railroading. One can only come so close to truly understanding travel during the 19th century when viewing a static museum piece.

To have a living museum acting as a passenger railroad allows visitors to the Northern Central Railway to step back in time to experience authentic railroad history.

However, we cannot bring this experience to life alone. We need the help of our dedicated staff, volunteers, members, and guests to keep this unique railroad experience alive and not relegated to a lifeless museum display.

Your donations will allow a new generation of enthusiasts to fully experience the smells, feels, sounds, and sights of an active passenger railroad typical to the many that built America. Thank you for your continued support and belief in the mission of the Northern Central Railway. Together we can bring history to life!