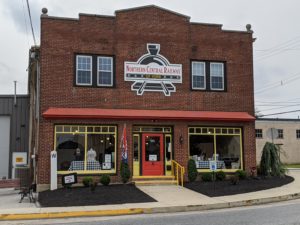 Northern Central Railway of York (NCR), formerly Steam Into History, Inc., was founded by William (Bill) Simpson, a York community business leader, and philanthropist. For ten years prior to his death in 2012, Bill and his life-long friend Reed Anderson, who passed away in 2021, combined their vision for community growth, love of York County, desire to enhance the economy of the region, and passion for trains to rally support from businesses and major donors to develop and launch Steam Into History.

An authentic replica of 1860’s steam locomotive, the William H. Simpson, provided the first train ride in 2013 on the same tracks upon which President Lincoln traveled to Gettysburg. In 2018, an Ex-Pennsylvania Railroad GP 9, built-in 1959, was purchased and mechanically corrected. A year later the engine was pulled into our station at New Freedom. In 2019, private funding and an Explore York grant were leveraged to initiate the building of our fourth-period coach car, designed to accommodate 60 passengers per excursion. Also in 2019, the Board initiated the process of rebranding Steam Into History, Inc. to Northern Central Railway of York to publicly denote the organizational choice to expand our rolling stock to include diesel equipment and acknowledge the historical importance of the railway we use.

This year NCR received support from the Commonwealth of Pennsylvania Commonwealth Financing Authority and capital campaign funds to extend our railway track through the Howard Tunnel to Hyde on the outskirts of York. This endeavor brought NCR one step closer to our organizational goal of operating our trains between New Freedom and the City of York.

The Mission of the Northern Central Railway of York is to enhance the economic engine of York County by delivering entertaining, historical, and educational experiences on an excursion railroad. Our goals are to provide rail-based, multi-generational entertainment experiences, educate riders regarding the United States and local history, inspire interest in rail history, and promote York County’s economic development through increased tourism. Northern Central Railway of York offers a unique experience for riders of all ages and backgrounds. It is a living, moving, a historical museum on wheels!

The railway’s popularity has continually grown as the number and types of educational and cultural experiences have increased over the years. As the restrictions imposed by the COVD-19 pandemic during 2020 and early 2021 are being lifted, NCR is offering a full schedule of safe, rail-based events. We are presenting a variety of holiday, educational, historical, and family-themed train rides to Seitzland, Glen Rock, Hanover Junction, or Seven Valleys throughout the 2021 season. This summer we initiated the S.T.E.A.M. Summer Camp program to introduce the concepts of Science, Technology, Engineering, Arts, and Mathematics in the platform of steam and diesel-based railway equipment to children aged six to nine.

To date, 144,000 visitors, from 48 states and 15 countries have enjoyed the experience of riding NCR trains, learning about the history of our country and of York County, enjoying family-based activities, and relishing the range of experiential events offered by the railway, while appreciating the beauty of York County.

Scenery – South-central Pennsylvania’s famed rolling hills frame the unique visual experience of the Northern Central Railway. The Northern Central Railway departs from the historic hamlet of New Freedom and visits places like Hanover Junction and captivating towns like Glen Rock. The world’s oldest rail tunnel with active rails, Howard Tunnel, lies along the NCRR tracks, and the nationally-recognized York County Heritage Rail Trail follows along the tracks for the length of the trip. York County is also known for its diverse architecture, evidenced by the 19th-century houses, commercial buildings, and barns along the railroad.

Themed Programs/ Rides – The past comes to life through Northern Central Railway’s themed excursions, where you can meet prominent historical figures such as President Abraham Lincoln, or Confederate General Robert E. Lee and his wife. Passengers can experience a real-life Wild West raid from the James-Younger Gang or learn about the Underground Railroad from William Goodridge.  Furthermore, special seasonal events like the hugely popular Tannenbaum Christmas Tree Train and Fall Foliage Excursions offer unique family experiences aligned with the seasons. Northern Central Railway offers exciting family-friendly excursions all year round!

Premium Equipment – The William H. Simpson No. 17 is an authentic replica of the steam locomotive that carried President Abraham Lincoln to deliver one of the greatest speeches in history, the Gettysburg Address. Northern Central Railway also offers rides pulled by GP-9, an authentic 1959 diesel engine that was a workhorse for the Pennsylvania Railroad. Lovingly restored rolling stock, including a unique combine car, creates a unique experience each and every ride.

Childhood Wonder – Northern Central Railway is for the kid in all of us, whether our first experience with a train was having The Little Engine that Could read to us by our parents, or seeing a locomotive pass by our car or house for the first time. To enhance the experience for children, Northern Central Railway offers fun opportunities throughout the year, from rides with the Easter Bunny and Santa Claus to tea parties and superhero excursions.

Four months had passed since the Battle of Gettysburg, the reputed high-water mark of the Confederacy. President Abraham Lincoln was invited to speak at the dedication of the Soldiers’ National Cemetery in Gettysburg. His remarks were a work in progress on November 18, 1863, as he boarded his five-car train in Washington, D.C., to start his four-hour journey to Gettysburg. Imagine Lincoln pondering his speech as his train rumbled north on the Northern Central Railway into York County, stopping at Hanover Junction to change trains to the Hanover Branch Railroad and continuing on to Gettysburg.

Some say that Lincoln edited the Gettysburg Address on the train, doffing his black silk top hat and using it as an improvised desk on which to write. Or maybe he wrote on the back of an envelope. There is some sentiment that he simply shared anecdotes and relaxed with his companions, who included Secretary of State William H. Seward.

What is certain is that what would become known as Lincoln’s Gettysburg Address is today considered one of the greatest speeches in American history. Lincoln’s journey to Gettysburg is one of the many exciting and intriguing York County connections to the Civil War that the Northern Central Railway will bring to life. Today, the rolling countryside along the old Northern Central route is relatively undeveloped – consistent with how the area would have appeared in the 1860s. The area’s unspoiled beauty belies the hub of purposeful activity that was Hanover Junction during the Civil War. Up to 30 trains stopped at Hanover Junction daily, as the Northern Central carried troops and supplies to and from Washington.  After the Battle of Gettysburg, wounded soldiers were transported to hospitals in York and Baltimore.

On April 14th, 1865, seventeen months after the Gettysburg Address, Lincoln was assassinated in Washington DC. The Northern Central carried Lincoln’s funeral train through New Freedom and Hanover Junction while traveling from Washington DC to Springfield, Illinois.